Wood for the Bilbao Project

The least and the most dense wood commonly used in violin making are:

The possibilities and combinations are huge.

We decided to choose a standard density spruce, most comonly used by violin-makers today.

It’s not  clear which maple density is the best but we decided to choose also standard density maple.

For future projects we could choose higher or lower density maple.

It is not easy to find proper wood with a defined value of  density.

For the top we chose half a log of a picea abies cut in 1995 and split in nine contiguous wedges from which we would obtain a group of  six very similar tops. 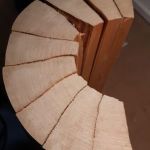 For the back we decided to use three very regular boards of Acer pseudoplatanus, the most common used maple. Six similar backs would be obtained from those boards. 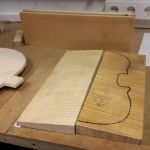